Identity on the Line (I-ON) is a large-scale cooperation project between six cultural history museums and one university, working together to explore the long-term consequences of different migration processes, forced or voluntary, which took place in Europe over the last 100 years.

Through the collection and dissemination of experiences from former migrants and their descendants, summarized and placed in factual historical contexts, we will unfold and transmit common features of migration from past to future generations. Our priority is to reinforce the sense of belonging to a common European space to contemporary migrants, to those who have settled and their hosting communities.

Transnational cooperation, the circulation of cultural works and players, is assured by a broad cooperation between museums in Norway, Sweden, Denmark, Poland, Lithuania, Slovenia and Croatia. Starting with similar approaches and using the same methods, each museum will work on one important migration process in its country by collecting and facilitating sensitive narratives in local exhibitions and uncovering challenges which have not been addressed before. The main findings and common features will be summarized and made available as a joint travel exhibition within Europe and a digital package, free to download. The working process initiates interaction between partners and other professionals, aiming at skill transfer, the anchoring of successful methods among colleagues, as well as developing toolkits and school packages.

Audience development will be provided through extended cooperation with and dissemination to defined target groups, including children, young people and under-represented groups, which former migrants are a part of. Using comprehensive dissemination methods on local, national and international levels, the project will contribute to increased mutual understanding among people in Europe with similar experiences regardless of time, place or event. Hereby, the importance and urgency of a positive and effective social integration of migrants will be demonstrated. 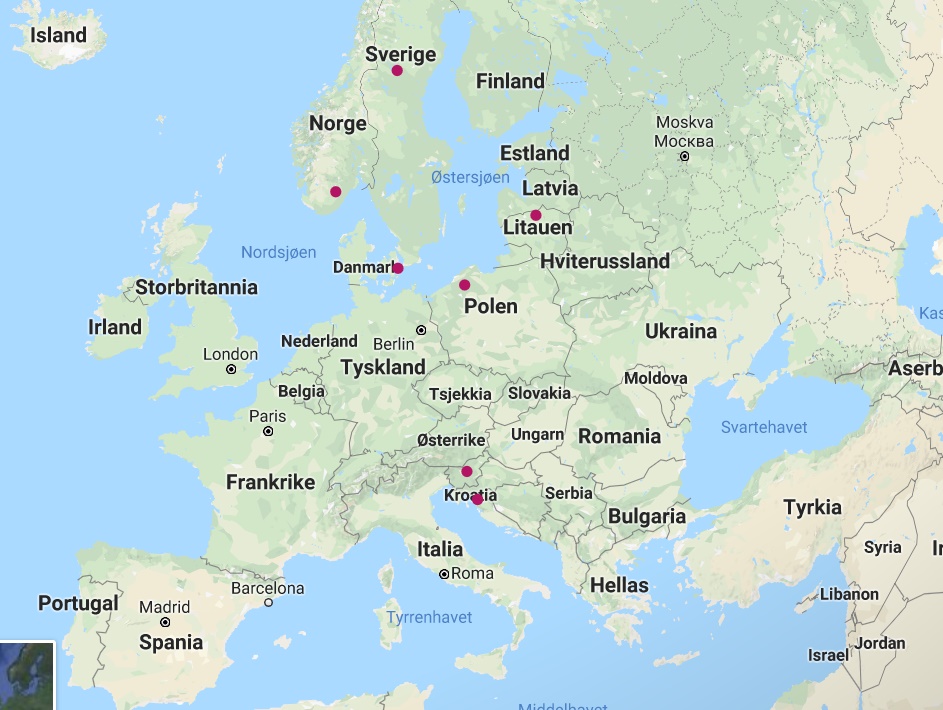 Each partner institution is responsible for a separate subproject in their respective countries. Below is a short overview of the seven projects, included the responsible museum and project manager.

P2: Denmark, The House of Knud Rasmussen; project manager Søren la Cour Jensen
Migration process: Greenlanders within the Danish society • The identities of Greenlanders living in Denmark. Both the selfpercieved identity of the informants and the foisted identity of the surrounding danish society. The effect on the informants and within their families.
Period migration: from the 1950’s until today.
Informants: Greenlandic migrants and their descendants

P4: Poland, The Museum of Middle Pomerania in Slupsk; project manager Marzenna Mazur
Migration process: Pomerania has a complex political history in terms of political affiliation, and due to the changing frontiers in the aftermath of World War II, the demographic structure was radically changed.
• Many German inhabitants were forced to leave • Internally displaced Polish inhabitants from different places and backgrounds who now settled and rebuild the cities. Period Aftermath of World War II, 1945 and onwards
Informants • Settlers and inhabitants of Pomerania born after 1945 • Contemporary Polish schoolchildren in Pomerania

P5: Lithuania, The University of Vilnius; project manager Neringa Latvyte-Gustaitiene
Migration process: Totalitarian regime and anti-Semitic policy of the Soviet Union after the war, persecutions, public intolerance especially towards Lithuanian Jews and Poles forced them to leave the country
Period Aftermath of World war II, 1945 and onwards
Informants • Jewish emigrants and their descendants, Polish soldiers and their descendants

P6: Slovenia, National Museum for Contemporary History; project manager Dr. Kaja Širok
Migration process: Migrants from ex-Yugoslav republics migrating to Slovenia, and their reinvention of identity after the Slovenian independence.
• After 1991 the «erased affair» happened when 18.000 people were removed from the registry of Permanent Residence in February 1992, losing all social, civil and political rights.Period 1945 and aftermath, culminating in the 1970s.
Informants • Immigrants to Slovenia from ex-Yugoslav republics, and their descendants generally, and those hit by the “Erased affair” especially.

P7: Croatia, The Ethnographic Museum of Istria; project manager Dr. Lidija Nikočević
Migration process The complex political history of the Istrian peninsula and its inhabitants involves a complex multi-ethnic population and history of 200 000 emigrants after World War II.
• Second and third generation migrated Istrians are searching for their roots and identitiesPeriod After World war II, 1945 and onwards
Informants •  Italians who had to emigrate from Istria, some of whom returned to Istria and others who did not, and their descendants.

Needs and challenges I-ON intends to tackle
To “safeguard, develop and promote cultural and linguistic diversity and Europe’s cultural heritage” is a general policy objective of the Creative Europe program. This has a trans- and international dimension, which requests dynamic cooperation, capacity and skills in the cultural sector.

Museums can make a difference in the lives of the people and communities, by being an arena for participation, intercultural dialogue, and by catalysing personal processes of identification and belonging to a community. Experiencing that one is not alone with one’s experiences and discover ways in which they are related to social processes such as migration, for example, can change a person’s lifeworld. Relating to and learning from other people, who have experienced and conquered similar experiences as oneself, can foster community and empower the individual by giving hope and affirmation that one is not alone. The parallels between former and newer migration processes can be engaged as bridges between the current and future common cultural heritage in Europe. To facilitate this, museums must work in participation with audiences locally, as well as reaching beyond the local and national level. This is a challenging order, which will be pursued through thorough cooperation.

Enhancing cultural dialogue and raising the awareness of common history and values and thereby reinforcing a sense of belonging, is the focus of all actions in this project. As museums with access to a uniquely tangible and intangible cultural heritage, we have chosen E. Legacy of the European Year of Cultural Heritage 2018 as our main priority. Nevertheless, as one will find below, in the description of the activities, I-ON relates in some way or another to all the main objectives. Among the concrete outcomes of this project, one finds the testing of innovative approaches to audience development, the organization of cultural activities on several geographical levels and the development and transfer of skills, competencies, and know-how.

This project will raise awareness of common history and values through the collection and dissemination of experiences from seven former migration processes in Europe. We will unfold and transmit common features of migration in European history from past to future generations, involving former migrants and their descendants in the collection and dissemination of experiences from factual historical contexts. Hereby, we aim to reinforce the sense of belonging to a common European space to contemporary migrants, as well as to those who have settled and to the hosting communities.

In sum, the project aims to assist inhabitants to take up and sustain a European identity and a diversified common cultural heritage by bridging historical and contemporary experiences of migration in Europe.

Together, the partners will focus on the following eight activities:

For further questions, please contact the project managers in the respective countries or Kathrin Pabst here.